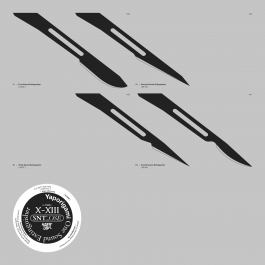 Yaporigami sure know how to craft his syncopated grooves to make them shudder and thrust their way through each immaculate track on this wicked release. I will have so much fun when i DJ with this precious gem!
(Finn of Tomland)

Yu Miyashita (aka Yaporigami) continues to baffle the ears, having scattered electrical debris on a plethora of releases and remix support over the years, One Sound Extinguisher is signed to Germany-based Kaer’Uiks—purveyors of robust exp-electronic music. A definitive whirlwind of activity, each sonic sculpture on this 4-track EP is a mechanized extension of the other. “First Sound Extinguisher” eradicates an industrial, percussive patchwork, its shuffled rhythmic blocks maneuver like clockwork. On “Second Sound Extinguisher,” a more militaristic approach is carved as the “Third” version manipulates raw echoes, distortion, and DSP in a cataclysmic stream. Closing with “Fourth Sound Extinguisher,” Yaporigami evaporates previous sonic elements in minimalist fashion—its punctuated beats still sharp as ever, minuscule clips, blips, and noisy elements continually break apart. An infected post-apocalyptic foray into abstract, circuitry-based music that is at once arcane, chaotic, and unusually appealing.
(Igloo Magazine)