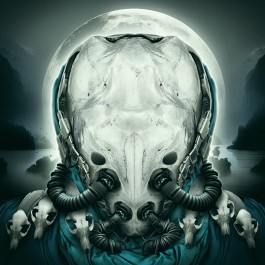 ʘCH⅄HↃʘ is a continuation of the ideas explored in ПLVXV⅃П, whilst at the same time, an evolution of sorts of what was written back then. If ПLVXV⅃П was more mechanical, with no effects used and a more straightforward approach to the composition of said songs; ʘCH⅄HↃʘ on the other hand is more organic, where effects were indeed used sporadically but as subtly as I could. I also didn’t shy away this time from using compression where necessary, to help the more organic elements of the songs to standout on a dynamic range level. The composition was also very different, even if some of the results were similar. Many experimental MIDI sequencers were used to create the rhythms and synth sounds on odd tempos, during very long takes where I'd select afterwards the best moments and did a more traditional sequencing on a DAW. As usual, all sounds were created from scratch using hardware and software.
(Xzicd)

Xzicd (aka Francisco Godinho) reveals ʘCH⅄HↃʘ, a six-pack EP of turbulent glitch and ravaged sound-design. Dynamic electrical range, excessive digital-signal-processing, and noise are rolled into a (somewhat) cohesive entity. Take “Ghalka Neij” as a prime example—an explosive electric mess that is somehow collected and torn apart just as quickly as you can get your head around it. “TertyxX_Ilkmar,.LovaV” opens with a downtempo crunch and vocodered voice grooves that is instantly accessible and disturbing—like a lost Aphex Twin relic. The same track is administered with a calmer Yaporigami remix, stretched into its elemental bits and bytes with a distilled, organic veil, there are moments of utter clarity in this remix. A wall of sound that is chaotic and transformative. “Ghalka Neij (Grischa Lichtenberger 0217_19 rmx 1b 1 3b)” brings to mind early Lexaunculpt wrapped around what Valance Drakes has delivered for the past few years—laid back glitch extraction that slithers through an electro chemical stream. JFrank takes the evacuated mental bliss of “Beta Chazn” and applies a rhythmic slant, head-bobbing beat and bass minimalism at its best—JFrank re-envisions the original, pulls back on the throttle, and paints a euphoric aural canvass worth repeated plays.
(Igloo Magazine)