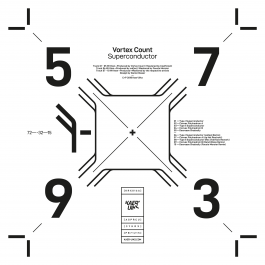 Fast forward to Superconductor, and here we continue with rugged and aggressive beats chiseled to its finest particles, all the while an organic, slithering undergrowth emerges from tracks like “Convex Polyhedrom B” and “Decrease Gradually.” It is with the artists clinical electronics that these tracks rip at the seams—”Decrease Gradually” does so with a shuffling rhythm, its static bleeps and blips on rapid-fire mode. The microtonal techno slivers found on “Type I Superconductor” elicit flickering mechanical debris and a soundtrack to unchartered dystopian realms. Elsewhere remix support by wk[es], Ap Hel, Rec Overflow, Rand Weiss, and Fausto Mercier only help to further elaborate Vortex Count’s precise sonic deconstruction, its heartbeat coiled up into 1000’s of glitched beats, bass, and utter distortion. These punctuated technoid layers are launched directly into the stratosphere with Superconductor at the helm. Fans of early-era Raster-Noton should take immediate notice.
(Igloo Magazine)