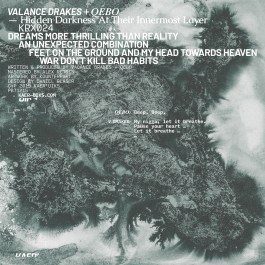 Jumping right into this audible fog from Valance Drakes and Qebo, “Dreams More Thrilling Than Reality” opens with vast atmospheric pressure, its low-flying soft notes gently draped over echoed and stretched bass as a mysterious dreamlike state is orchestrated. Glitched, crunchy drums enter midway through, carefully taking over the woven signal-processing and slow-motion rhythm. These two aliases merge and converge effortlessly examining a subtle undergrowth of simmering drones and dystopian soundtracks while engaging in their signature sonic craft—isolated and eroding experimental electronics (as evidenced further on the crackling ambient blips and bleeps of “An Unexpected Combination”). There’s an eerie layer spread through each piece with “Feet On The Ground And My Head Towards Heaven” perhaps the standout—the cascading air and far away shape shifting tones in this effervescent piece drifts like no other, as if energized by the remains of a supernova many thousands of light years away. The closing track, “War Don’t Kill Bad Habits,” emits similar transmissions albeit with a darker strain of background glitches and synthesizer noodling—its broken beats once again forming after a few minutes as the dense cloud structure evaporates. Hidden Darkness At Their Innermost Layer sees both multi-faceted sound sculptors of this century dipping into the far recesses of the mind by mangling ambient glitch tentacles in the most serene plateaus.
(Igloo Magazine)