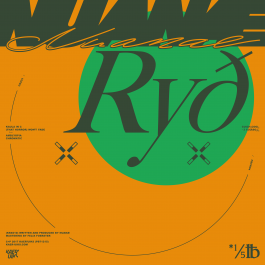 Following hot on the heels of Yaporigami’s One Sound Extinguisher on Kaer’Uiks, Nuanæ releases Ryð, a slick 5 track ep of dreamy technoid idm, harkening back to sound of early 2000’s Schematic Records. An intricate display of subtle micro-edits and unusual harmonic layering, drawing inspirations from both the natural and synthetic, and offering them up into a smorgasbord of little audio delights. Each track is an opportunity to taste exotic wonders of a world far away, familiar yet different, like the reflection in a pool of water. At first glance it appears familiar, but is actually fluctuating with every little disturbance, twisting the image into something alien and unknown. Ryð begins with Kaula in C, a ritualistic menagerie of tribal percussion and glitchy data sequences played by a malfunctioning robot. Very interesting listening space is created with extensive use of large, carvernous reverbs that seem to envelope you in their breadth. It effectively sets the tone at dark and ominous as you descend deeper into the unfolding dream. (That Horror) Won’t Fade comes in next, with is almost algorithmic melodic structure and infinite-sounding loops. Beautiful focus on the slightly off feel of the chord structure, which effectively locks you in with it’s strange and almost predictable unpredictability. Progressing further, the title track Ryð surfaces, revealing a more calm and serene layer to the dream. One that gently lulls you to peaceful incapacitation, providing visions of colorful clarity as cerebral holographic constructs, as it slowly pulls you below the surface in it’s gentle embrace. Amblyopia next takes your mind even deeper still, into the recesses of itself. It is the aural equivalent to regressing back to the womb, peacefully floating in the dark abyss awaiting the moment to be reborn back into this foreign and formerly unknown world. Chromatic facilitates that birth, but directly into the heart of a machine. You realize that you are no longer you, and that the dream had been real all along. Futuristic sound design propels your consciousness through layers of mechanical nuances, artificially indoctrinating you with endless seas of information. Digital integration has been completed, and you are now a part of something much, much bigger. Ryð is a deep and enjoyable listening experience full of great sound design and complementary aesthetics. Haunting melodies and harmonies keep you in a kind of uncomfortable state while little mechanical rhythms dance all around. Nuanæ has developed a very coherent sonic story running through, so critical listening is definitely recommended.
(Ear Candy Archives)

Earlier this year, Nuanae’s Clusters And Refractions EP was described as “creating sparse dystopian worlds of dysfunctional audio beauty. A visceral post-IDM charcoal display that ravishes the ears with exquisite noise and organized chaos.” Fast-forward to the Ryð EP, and Nuanae has elevated the trajectory to that of softer instrumental electronics with all the bells and whistles of past Artificial Intelligence-era finesse. The title-track is emblematic of this sonic shift, its echoed percussion and fine-tuned ambient undercurrent could have easily slid into Incunabula without notice. Elsewhere you’ll find yourself walking through abandoned corridors. The darkened pseudo-tribal feel of “Kaula in C” is an alluring 3-minute venture through slight blips, bleeps, and lively drums. The bumpier beatwork of “(That Horror) Won’t Fade” dabbles with casual glitch elements but continues with a pleasant Quinoline Yellow-inspired exp-electro feel. On “Amblyopia” we drift into subdued minimal fissures highlighted by synthesized clips, whirs, and roughed static that is a calm beat-less foray through time and space. On the more technical side of the palette, “Chromatic” delivers a combination of the above-mentioned musical architecture. The emotional push-pull effect of “Chromatic” highlights the ease and precision in which the artist is able to sculpt futurist environments via sound—all the while keeping the listener tuned in to every move. Ryð is a refreshing and engaged five-track extended player that effortlessly crosses the wires between mechanical and instrumental production. Nuanae’s sound, as a result, sways back and forth between classic IDM and current-era electronic experimentation.
(Igloo Magazine)