Michael Valentine West
— All Because Of You 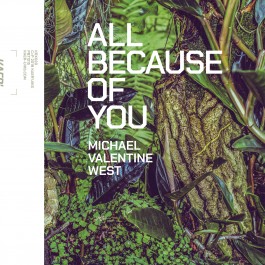 Michael Valentine West (Daddy Tank, Bedroom Research, The Irrational Media Society, et al) explores vast electronic tapestries on All Because Of You—nine tracks spread through a microscopic myriad of found sounds, clicks, cuts, snips, and snaps. From the hypnotic, and ambient static transmission of “From Umi to Ummah,” there’s a sense of wide open spaces, whereas the title track (and its closing reprise) evolve with delicate piano strokes and glitch-infused bits and bytes. In many aspects MVW expands and contracts sound designs that adhere to lost soundtracks to dystopian worlds. Take the erratic and percussive pulse of “I Can’t Read” as it breaches the IDMosphere and breaks apart in a maze of mechanical, Autechre-infused abstraction. Then there’s the powerful industrial breaks of “We Spoke of Prince” with its heavy bass and dub distortions galore—a highlight of the album. But just as these fragmented, minimal loops begin to take shape, there are further stones left unturned as in the gritty—yet somehow rhythmic—tones of “Until The End of the World” where tranquil clicks migrate to the foreground. All Because Of You, as a result, is a balanced foray into creative sonic sculpting that merges organic and digital landscapes.
(Igloo Magazine)