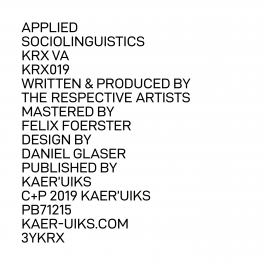 A vast and sprawling compilation—many tracks, and many many artists. Without actually reading anything about this release or where it comes from, I popped it on and spent several sessions listening to it and came back amazed at how coherent this compilation is for something that seems like a community effort. We often forget that Autechre, Aphex Twin, Warp Records, and the other prolific masters of our age, do not exist in a vacuum, and that in-fact as much as everyone draws on them for inspiration, they themselves are a part of a larger community which in-turn inspires them. Many of the things we hear in the most popular works have themselves bubbled up slowly through a scene, to later be distilled into their commercial essence. This is a great snapshot of the output of such a community, and while common threads of influence run throughout Applied Sociolinguistics, making it coherent, everyone brings their own style to the table here. The music itself is great, I enjoyed all the tracks, to a greater or lesser degree, in total they seemed to touch on every variation of what I would call modern, progressive IDM music, weaving together a vast array of influences from across the decades. But taken as a whole, as a document of this splinter of the IDM scene, it’s also fascinating to see how each individual artist has brought their own musical leanings to bear. Different schools of thought, from industrial noise experimenters to advanced DSP mathematicians. all come together to form a consistent and spectacular showcase of where we may be going in the future, as a genre. The common thread is sonic exploration, aggressive and dark vibes blended seamlessly with bright optimism, an intense focus on technical sophistication, and trying not to do what’s already been done before.
(Igloo Magazine)